AP sources: US to sanction nations for importing Iranian oil

WASHINGTON — The Trump administration is poised to tell five nations, including allies Japan, South Korea and Turkey, that they will no longer be exempt from U.S. sanctions if they continue to import oil from Iran, officials said Sunday.

Secretary of State Mike Pompeo plans to announce on Monday that the administration will not renew sanctions waivers for the five countries when they expire on May 2, three U.S. officials said. The others are China and India.

It was not immediately clear if any of the five would be given additional time to wind down their purchases or if they would be subject to U.S. sanctions on May 3 if they do not immediately halt imports of Iranian oil.

The officials were not authorized to discuss the matter publicly and spoke on condition of anonymity ahead of Pompeo’s announcement.

The decision not to extend the waivers, which was first reported by The Washington Post, was finalized on Friday by President Donald Trump, according to the officials. They said it is intended to further ramp up pressure on Iran by strangling the revenue it gets from oil exports.

The administration granted eight oil sanctions waivers when it re-imposed sanctions on Iran after Trump pulled the U.S. out of the landmark 2015 nuclear deal. They were granted in part to give those countries more time to find alternate energy sources but also to prevent a shock to global oil markets from the sudden removal of Iranian crude.

U.S. officials now say they do not expect any significant reduction in the supply of oil given production increases by other countries, including the U.S. itself and Saudi Arabia.

Since November, three of the eight — Italy, Greece and Taiwan — have stopped importing oil from Iran. The other five, however, have not, and have lobbied for their waivers to be extended.

NATO ally Turkey has made perhaps the most public case for an extension, with senior officials telling their U.S. counterparts that Iranian oil is critical to meeting their country’s energy needs. They have also made the case that as a neighbour of Iran, Turkey cannot be expected to completely close its economy to Iranian goods.

Oil prices spiked on Monday — past highs not seen since last fall — after reports that Washington is set to announce that all buyers of Iranian oil will have to end imports, or be subject to U.S. sanctions. 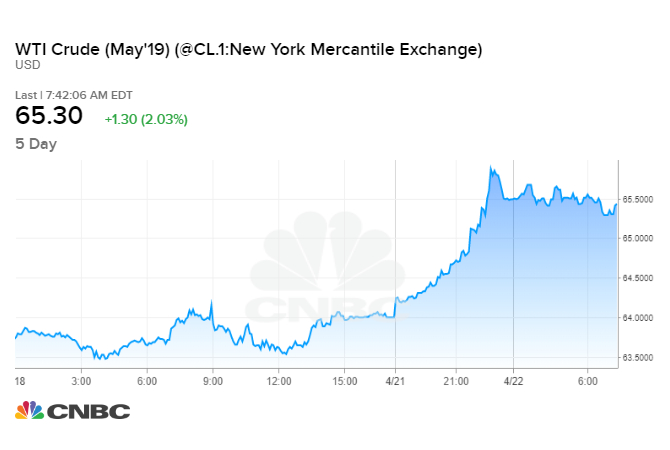 That price spike followed a report by the Washington Post, citing two unnamed State Department officials, that U.S. Secretary of State Mike Pompeo will announce that the State Department will cease granting sanctions waivers to any country still importing Iranian crude or condensate, an ultra-light form of crude oil, after May 2.

“The sanctions (are) obviously one of the major movers, I think, which is influencing prices,” said Daryl Liew, head of portfolio management at financial services company Reyl Singapore. He also pointed to stronger-than-expected economic growth data from China last week, which could be driving demand expectations.

Brent prices have risen by more than a third this year following a collapse in the cost of crude in the final months of 2018. U.S. crude has soared 44 percent year to date.

The U.S. reimposed sanctions in November on exports of Iranian oil after U.S. President Donald Trump unilaterally pulled out of a nuclear accord struck in 2015 between Iran and world powers. Washington, however, granted eight of Iran’s biggest oil buyers exemptions that allowed them limited purchases for an additional six months.

Of the buyers of Iranian oil, Liew said India could suffer the most from Washington’s move.

“I think India is probably one of the key potential countries that might suffer from a higher oil price, in terms of their current account deficit, for example. And that’s going to be basically putting pressures on inflationary pressures as well,” Liew said, speaking on CNBC’s “Street Signs” on Monday.

“No doubt the Indian central bank has … turned to a more dovish stance in recent meetings. But if oil prices continue to hit higher, and inflationary pressures come back into the picture again for India especially, then the central bank probably has to reverse the dovish moves,” he concluded.

The waivers have allowed Iran to continue exporting about 1 million barrels per day, down from roughly 2.5 million bpd last year.

The development on sanctions comes as global oil supply is already tightening, with OPEC leading supply cuts since the beginning of this year, to prop up crude prices.

OPEC and its oil market allies, including Russia, have aimed to keep 1.2 million bpd off the market since January. The group next meets at the end of June to decide whether to lift the production caps or continue suppressing output.

Meanwhile, major OPEC oil producer Libya’s capital Tripoli was hit by a series of airstrikes and explosions over the weekend, in escalating violence that could threaten oil supply further.

The country has been torn by conflict since the fall of dictator Muammar Gaddafi in 2011. It was sent into fresh conflict in recent weeks after its eastern military leader ordered his forces to move in on the capital where the United Nations-recognized government sits.

Analysts and traders keep a close eye on Libya because its oil production has been one of the biggest wild cards in the oil market in recent years. Its output has fluctuated wildly as the nation’s southern oil fields have frequently gone offline amid fighting.

One analyst told CNBC on Monday that the Libya situation will put more pressure on oil prices, particularly if the conflict escalates.

“Libya is producing 1.1 million barrels per day. If things go wrong, immediately somewhere around 300,000 to 400,000 barrels per day of oil may be affected,” said Kang Wu, head of analytics for Asia at S&P Global Platts.

“A lot depends on how Saudi Arabia will react to the situation — they have surplus capacity — but supply concerns will keep pressure on oil prices in the short term, ” Wu added.

— Reuters contributed to this report.

At 89, can afford to move into a care home and still put money aside for children?